I'm speaking with David Metzger about his new feature film, "The Silver Screen Roadshow" -- we'll be discussing the making of the film, and what makes classic cinema so magical.

Go down memory lane with us I'll be playing songs made famous by classic films at 9am, and David will join me at 10am.

David Metzger is a Vermont filmmaker who writes, produces, and directs his own feature films, shorts, and music videos. He also produces and co-hosts Vermont Film Essentials, a weekly public access program that discusses classic cinema. Learn more at http://lonetreefilms.net/ 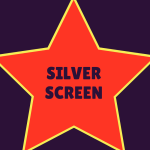