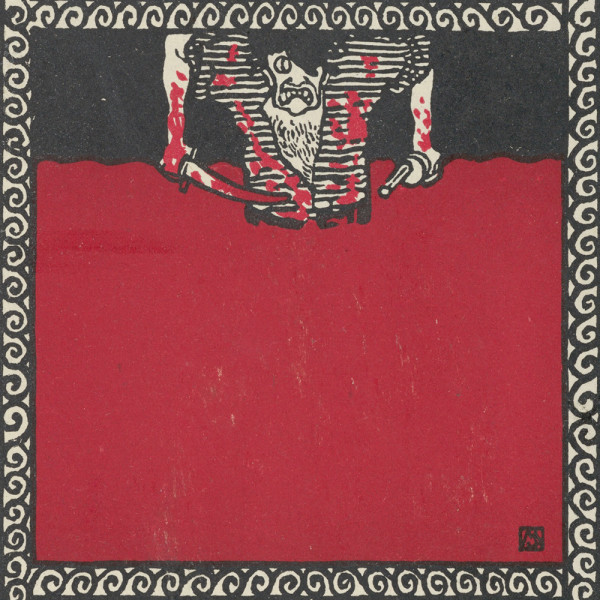 Variety Act 5: The Avenger of His Honor by Moriz Jung, 1907
Image source

Two hours of music about insanity, crime, passion and execution. Songs filled with the outsiders of this world, those driven mad by the troubles of life, those that take it further and act on the schizophrenic impulses or passion induced rage and even those that pay for their crooked ways with time in the big house, or worse - a one way trip to the gallows. Part of the Halloween season but not an explicitly Halloween episode series.

Before he was Napoleon XIV, Jerry Samuels was a singer and songwriter. His song "The Shelter of Your Arms", as performed by Sammy Davis Jr., was in the top 20 in 1963. But his biggest success came under his nom de plume. His song "They're Coming To Take Me Away, Ha-Haa!" entered the Billboard Hot 100 at #50, but in a few weeks it peaked at #3. The story goes that mental health professions began believing that the singer was actually insane and this record exploited him, and soon, hoping to not possibly offend anyone, the song was largely pulled from the airwaves and it prematurely dropped off the charts. The song tells the sad tale of a man suffering extreme anguish and a mental breakdown after his dog runs away, however this is not revealed until the song's third verse. The song is best remember for it's technical innovation and use of the glissando effect. Samuels was a recording engineer at the time and discovered a way to change the pitch of his voice without changing the tempo, he was thus inspired to create a song to showcase it. The B-side contains the exact same song, but played backwards.

The band started when comedy members of Sleepy Sleepers, a Finnish comedy rock band met up with director Aki Kaurismäki and decided to make music and music videos joking about the then unraveling Soviet Union. This culminated in the feature road film "Leningrad Cowboys Go America" where the fictional band travels from Siberia to the US to try to break into the music business because Americans will buy anything. After the film, the film actually formed to tour and record. In 1994, they performed the Total Balalaika Show with the 160 member Russian army choir the Alexandrov ensemble where they cover classic rock 'n' roll tunes.

The Man In Black has had a long history and tumultuous history with birds. In 1965, after setting his camper-truck on fire, maybe unintentionally, that destroyed 508 acres of Los Padres National Forest watershed he followed by not reporting the incident. The destruction of the forest reportedly killed 49 of the 53 California condors living in the area. Today the species is critically endangered. In 1981, the birds enacted their revenge. One of Cash's pet ostriches met him on the trail and began hissing at him. He went on his way and when he had to pass the ostrich again, Cash was prepared and brought a big stick. When the ostrich moved, Cash swiped at it and missed, the ostrich jumped in the air, made contact and broke two ribs and cut open Cash's stomach, when he fell to the ground he broke three more ribs. Unfortunately this encounter got Cash re-addicted to pills. But only three years later, Johnny Cash reached the summit of musical achievement. There are conflicting stories on how "The Chicken In Black" came about. There is a rumor that Johnny Cash recorded it in a move to have his record label release him from his contract, another says the label coaxed him into recording it due to the strength of songs like "A Boy Named Sue" and that Cash was behind promoting the song until Waylon Jennings told Cash that he looked like a fool in the music video. Either way, Cash produced this masterpiece with the help of lyricist Gary Gentry and it went to number 45 on the country charts.

Countries represented: USA, England, France, Bahamas, Canada, Italy, Netherlands, Finland, Russia.
"Variety Act 5: The avenger of his honor or eye for an eye tooth for tooth head for head arm for arm leg for leg ear for ear and so on. drama in an elevator"
Comments
You must be signed in to post comments.
- -
Sign in