Skeeter Sanders loves rainbows. For him, the multi-colored arc is a symbol of diversity. And Sanders is a living, breathing embodiment of diversity, the son of an African-American mother and Native American father.

Born Dion Sanders Broadnax in New York City in 1953, he got his nickname "Skeeter" from his mother, who told him that when he was a baby, he was "as tiny as a mosquito" and the nickname stuck.

His interest in broadcasting in general -- and radio broadcasting in particular -- was sparked by a 1967 visit to his Brooklyn junior high school by Chuck Leonard, the legendary disk jockey from New York's WABC-AM, which was then the city's number one-rated top-40 hits station.

A reciprocal visit to the WABC studios in Manhattan got him hooked.

Sanders credits Leonard -- and later Frankie Crocker, who in the 1970s turned an obscure New York FM station into the urban-contemporary powerhouse WBLS (and, by extension, laid the groundwork for the transition of music radio from AM to FM) -- as his inspirations for getting into broadcasting (although he never met Crocker in person).

But nearly 30 years would pass before Sanders would finally break into radio himself. During much of that period, he was a reporter and editor for several community newspapers in New York and San Francisco.

It was during his time in San Francisco that Sanders found himself switching back and forth as a listener between the then-smooth jazz-formatted KKSF-FM (now classic-rock KOSF-FM) and the formerly "quiet storm" R&B-formatted KBLX-FM (now a straight-ahead urban- contemporary hits station).

After moving to the Burlington area in the summer of 1994, Sanders landed a weekly DJ slot, hosting a classic-R&B show on WRUV, the student-run FM station at the University of Vermont. But a falling-out with WRUV's student managers led Sanders to move in 1998 to WGDR, the community station in Plainfield, Vermont owned by Goddard College, where he launched "The Quiet Storm" -- whose 50-50 mix of smooth jazz and soft R&B is a homage to both the old KBLX and the now-defunct KKSF.

Sanders has remained at WGDR ever since, not only broadcasting locally to the Barre/Montpelier area, but also (since 2015) producing the national version of his program, which is currently carried on 20 Pacifica Radio Network-affiliated stations from coast to coast.

Sanders has also worked in commercial radio, anchoring the weekend overnights at WNCS-FM (The Point) in Montpelier from 1999 to 2002 and operating the master control board at WNCS' sister station, WRSA in St. Albans from 2003 to 2008.

For Sanders, who lives in Shelburne, bringing "The Quiet Storm" to the Burlington-area airwaves on WBTV-LP is the fulfillment of a more than decade-long dream to broadcast his show close to home -- especially considering the fact that Burlington is home to the Discover Jazz Festival, the largest jazz festival in northern New England -- and from which he dreams of broadcasting "The Quiet Storm" live in the not-too-distant future. 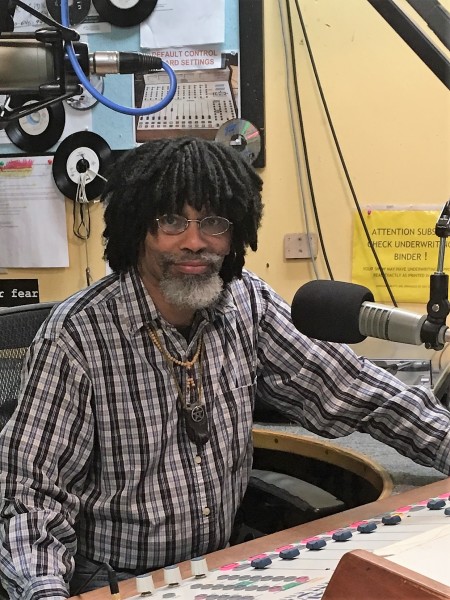