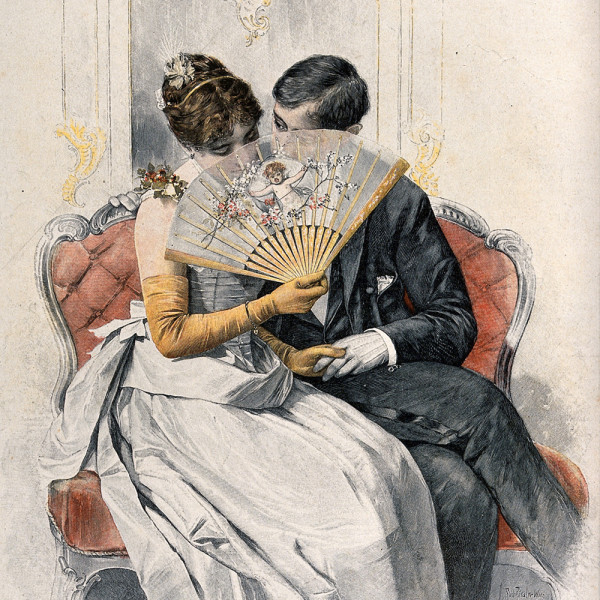 Detail - A Young Couple Sit On A Sofa Holding Hands While She Coyly Holds A Fan Up To Her Face by Rudolf Rössler, 1894.
Image source

Two hours of love songs to celebrate Valentine's Day. All romantic love songs, all of them authentic and, if you can believe it, no cynical ones slipped in.

It’s Oh So Quiet!, cover of the Horst Winter song "Und jetzt ist es still", was released as the B-side to "Murder, He Says", which did not chart (And which I will be playing on next week’s show). However, most people may be familiar with Björk’s 1995 version which is still her biggest single. Hutton started performing at a very young age, reportedly she was singing with her sister and mother in the family’s speakeasy at as young as three years old. This also meant most of her younger years were spent on the run from the law. Betty Hutton reached stardom in her sixth released feature film, the Preston Sturges screwball comedy, “The Miracle of Morgan's Creek”. She continued her film career with the starring role in 1950’s “Annie Get Your Gun”.

The idea of an album of traditional pop standards sprang from McCartney’s childhood memories of his family’s singalongs. Along with his producer, McCartney selected the songs all within that era as well as two songs he penned himself that fit with the style. The unfortunate album title, “Kisses On The Bottom”, comes from a lyric in the lead song "I'm Gonna Sit Right Down and Write Myself a Letter", originally performed by Fats Waller. Paul has described it as: “This is an album you listen to at home after work, with a glass of wine or a cup of tea." The record peaked at number 5 on the US Billboard charts.

"Love is not something that you can put chains on and throw into a lake. That's called Houdini. Love is liking someone a lot." - Jack Handey